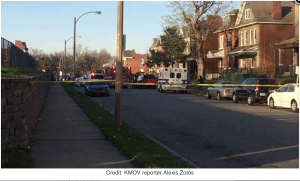 NORTH ST. LOUIS, Mo. (KMOV.com) –
A bicyclist is in critical, unstable condition after being hit by a car in north St. Louis Monday evening.

Around 6 p.m., the 52-year-old victim was riding his bicycle on the sidewalk when a 22-year-old man driving a 2005 Chevrolet Cobalt was stopped by officers for a traffic violation in the 1400 block of Belt.

When the vehicle pulled away from the curb, the car drove through a stop sign at Minerva and struck a 2000 Oldsmobile. After the collision, the Chevrolet Cobalt drove onto the east sidewalk of Belt, striking the bicyclist, police said.

The 22-year-old driver was taken into custody at the scene.

According to police, three children, ages 1 to 4, were inside the Chevrolet Cobalt at the time of the crash. They were not injured.