ST. LOUIS COUNTY • Peggy Vassallo’s prelude to police work came in 1974 when she and her father were scavenging for a Christmas tree on the Desloge family estate near Florissant and discovered the skeletal remains of two murdered Radio Shack workers abducted six weeks before.

She was Peggy Kaelin then, just 13 years old and the daughter of a longtime St. Louis police lieutenant, Edwin J. Kaelin. Decades later, as a Bellefontaine Neighbors police sergeant, she told people the gruesome discovery in the still-unsolved murders led her to a career in law enforcement.

“She said, ‘That’s when I knew I wanted to be a police officer,’” said Gregory Warnusz, 68, a Bellefontaine Neighbors resident and police chaplain who had chatted with Vassallo at a recent neighborhood night out. 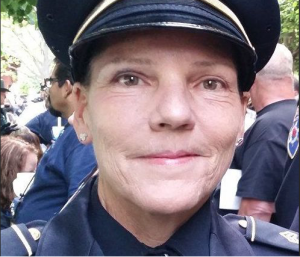 Vassallo, 53, died Monday after being struck by a car on her way to work. She was in uniform and was driving her Jeep Cherokee when she rear-ended a Kia Amanti on eastbound Lindbergh Boulevard just west of Old Jamestown Road near the defunct Jamestown Mall. The collision caused minor damage.

Vassallo got out of her Jeep to check on the woman in the Kia and approached the Kia’s passenger side. Bellefontaine Neighbors Police Chief Jeremy Ihler said Vassallo called for an ambulance because the woman complained of neck injuries.

She was talking with dispatchers when an eastbound Ford Fusion swerved around the stopped vehicles and struck Vassallo. The impact caved in the Fusion’s windshield and knocked off one of Vassallo’s shoes.

Police believe the driver of the Fusion tried to avoid Vassallo but was going too fast to stop. Vassallo was pronounced dead at DePaul Health Center about 11:30 a.m.

The women driving the Amanti and Fusion stayed at the crash scene and were cooperating with investigators. St. Louis County police withheld their identities.

Vassallo was the Bellefontaine Neighbors Police Department’s community relations officer, served as a DARE officer at several schools and oversaw the neighborhood watch program. She’d been with the department about 15 years and became a sergeant in December 2011. She was with the St. Louis County Police Department for about 13 years before joining Bellefontaine Neighbors.

“She did such an array of things that this loss is catastrophic not only to the city and police department, but to the community she served and all the lives she has touched,” Ihler said.

Bellefontaine Neighbors Mayor Robert J. Doerr said Vassallo’s position as a community relations officer was not a job to her, but a “ministry.” “She lived to help others,” he said.

Vassallo was the second-youngest of 10 siblings. In addition to her father, two of her brothers were city police officers. She was married with one son, 34, and had two granddaughters, 8 and 10 years old.

“We could always count on her,” said her sister, Patricia Kaelin, 66. “She was a very caring person and felt she was doing all she could to help people.”

Bellefontaine Neighbors police said they are counting her death as a “line of duty death” so that her family can receive death benefits. Ihler said Vassallo went on duty the moment she summoned medical treatment for the driver she rear-ended. BackStoppers has also pledged support for her family.

Kim Bell and Tim O’Neil of the Post-Dispatch contributed to this report.