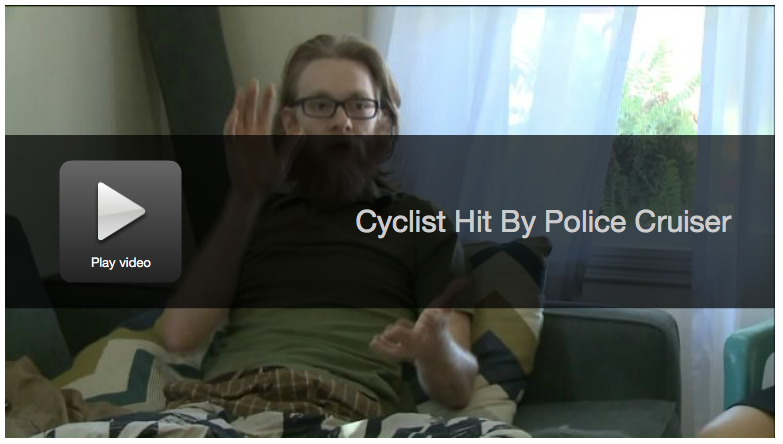 CREVE COEUR, MO (KTVI) – A St. Louis bicyclist is recovering from injuries he suffered after being struck by a St. Louis County Police car.  Justin Branson says he has a fracture in his back and a bruised lung.  He was cycling Sunday night around 9pm when he was struck while traveling east on Olive Blvd. near Woodson Rd.  The police car was also traveling east on Olive.

“I got knocked off my bike and thrown over the hood, and then kind of off the side of the car,” said Branson.

The avid cyclist showed us flashing red lights he says were on his bicycle and backpack Sunday night.  The area where he traveled does not have bike lanes.  Branson’s attorney, Michelle Funkenbusch, says her client has every right to be on Olive Blvd.

“The police officer was required to pass within a safe distance away,” said Funkenbusch.  “In the state of Missouri, that’s the law.”

St. Louis County Police confirm a police cruiser struck the cyclist and had damage to the front right bumper area.  A spokesperson says it’s too soon to comment on whether the officer did anything wrong.

Funkenbusch has represented other cyclists involved in accidents.  She feels cyclist safety is an issue that needs more attention.  She says there are bike lanes on some parts of Olive, but not the stretch where her client was struck.

“It’s very dangerous to have lanes in some parts of the road and not in other parts,” Funkenbusch said.  She believes the area needs more continuous bike lanes.​