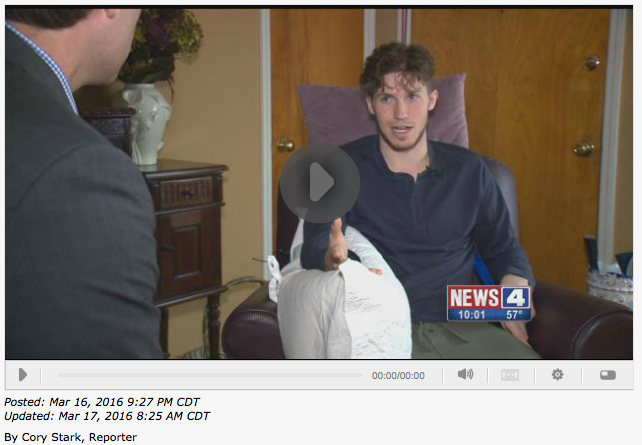 A bicyclist was injured when he was ran over by a semi-truck and left on the side of the road in South County on March 10.

Brendan Middleton, 29, said he was hit by a tractor trailer while riding his bike along a section of Lindbergh Boulevard that overpasses Interstate 55, which he does every day to get to work.

“I got hit in the side by the trailer and by at least a couple of the wheels and at that point, I’m launched two or three lanes into Lindbergh,” said Brendan.

Brendan said he was able to use his bike as a crutch to get to the side of the road. Lying on his back, he said what happened next he still can’t believe.

“The driver got out and was walking back just to see if I was alive and he realized I was alive and turns around and walks back to his truck and drove away,” said Brendan.

Brendan said he is severely bruised and has a fractured pelvis.

Courtney Middleton, the victim’s mother said, “It breaks my heart, it absolutely breaks my heart to think that somebody would just leave him like that.”

Middleton said he is back home after several days in the hospital. His family said they are trying to figure out how to care for their son and are focused on finding the truck driver.

“There is enough traffic at that hour of the day, the commute starts at that time, somebody had to see something and we really need somebody to step up and say, ‘I saw who did this,’” said Courtney.

Family members said it could take several months for Brendan to fully heal. Meanwhile, his mother has a message for all motorists.

“There are bicycles on the road, pay attention to them, and if you have an accident with somebody, stop,” said Courtney.

St. Louis County police said they do not have a lot of information to go on.

Police said there are cameras at the intersection, but because it was dark outside and there was some rain, it is hard to see anything.

Anyone with information regarding the hit-and-run should contact police.