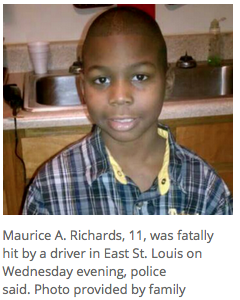 EAST ST. LOUIS • An 11-year-old East St. Louis boy died Wednesday night after he was struck by a vehicle, and several other vehicles drove around him as he lay critically hurt in the street, police said.

A family member identified the child as Maurice A. Richards.

The incident happened about 6:30 p.m. A motorist who saw other cars drive around the boy in the 3700 block of State Street stopped to help, police Detective Jason Hicks said. The man blocked off the street and called 911.

The driver who struck Maurice left the scene. “We have no vehicle description, no suspects as of right now,” Hicks said.

The boy was taken to Cardinal Glennon Children’s Hospital in St. Louis, where he died about an hour later.

He lived in the 500 block of North 37th Street, near where he was hit. Family members told police he was simply trying to cross the street, Hicks said. It is one of the main streets of the city.

Maurice was a student at Gordon Bush Elementary School and liked to play with his four sisters and brother, said his grandmother, Gertrude Richards.

“He was a happy kid. He loved to ride his bike,” a tearful Richards said late Wednesday. “He loved to eat. He was mostly a meat eater. He liked to eat like his daddy.”

He was the son of Bobby Richards and Erica Steele.

Gertrude Richards said Maurice’s relatives didn’t know how long the boy was in the street, and said that witnesses said his clothes were “drenched” from the rain.

“They said one lady was praying over him, and she asked other people to join and they wouldn’t join,” she said. “I guess they just drove by. They had to stop another car from almost hitting him.”

Hicks implored anyone with information to come forward. “The citizens need to come together and try to get who did this and get justice for that young man,” he said.

He called out those who drove around the boy. “Just for the fact that they’re seeing someone lying in the street and didn’t render aid … they need to be held accountable. We as citizens of East St. Louis need to start taking a more serious role in things that go on.”

Anyone with information about the incident is asked to call East St. Louis Police at 618-482-6600.