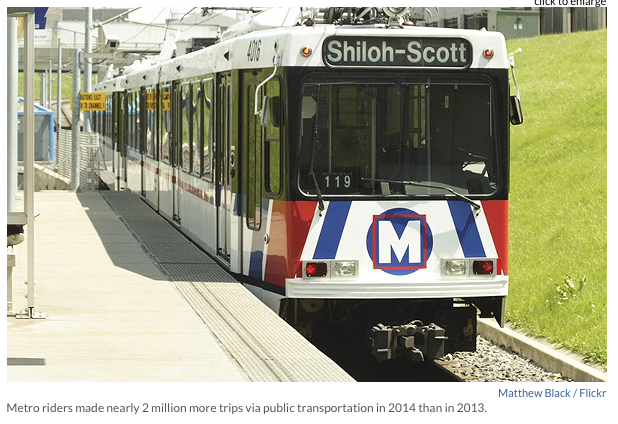 On his way home from running errands, Robert Schmidt doesn’t appear to be in much of a hurry. The octogenarian pumps the pedals of the bicycle perhaps once per second, his trousered legs bending outward in a diamond shape around him. Four plastic grocery bags are strapped to his handlebars, two to a side, and the orange cap of a repurposed Gatorade bottle peeps out from his rear left pocket. Passing drivers, to their credit, afford him plenty of room on the neighborhood street.

Along 12th Street, at the stop sign at Sidney Street in Soulard, Schmidt slowly leans down to pet a small dog that wags its tail with gusto. On Pestalozzi, beside the towering Anheuser-Busch brewery, he greets a young woman who stops jogging, pulls out her earbuds and engages him in conversation for a few moments. Near the middle of the overpass that cuts across Interstate 55, he smiles at me, scooting the bike over to the gutter when I say hello.

“I like the bike because I can go down to the river and take my binoculars and look at the trains,” he explains over the whir of motors on the highway below. There are too many cars in St. Louis, he adds, but he has never driven one in all his years here. He enjoys the simple life he leads and thinks the bike — “a girl’s bike,” he chuckles, pointing at the frame’s telltale diagonal top tube — has kept him in shape.

In a region where residents log an average of 32 miles on their odometers every day, Schmidt’s car-free habits are far from the norm. According to the U.S. Department of Transportation, drivers in the St. Louis metropolitan area outpace U.S. cities of similar population, including Baltimore and Denver, by more than 5 trillion total miles per year. The wealth of highways skimming across or around the heart of St. Louis accounts for much of this. Why take a train, bus or bike when the freeways will get you there faster in most cases — and within the comfort of your own enclosed space?

But Schmidt is not alone in his alternative approach to getting around. Nationwide, figures for total vehicle miles traveled have remained relatively flat in the last decade, coinciding with a frail economy as well as a significant uptick in the percentage of young adults opting out of car ownership. Locally, bike commuters are a growing presence along city streets, and Metro riders logged nearly 2 million more trips via public transportation last year than they did in 2013. Still, those are mere drops in the bucket in America’s steadfastly automobile-centered culture.

As I listen to Schmidt and other non-drivers around town, many point to financial and situational necessity, rather than ecological reasons, as the main impetus for getting around the way they do.

“You want to know why people take the bus?” asks one woman, sitting on a painted cement curb at a bus stop. “It’s obvious. The bottom line is that it’s our only means of transportation.”

Theresa, a senior citizen, echoes this sentiment: “I don’t really like taking the bus, but I don’t have another choice. You gotta do what you gotta do.”

While I find it satisfying to consider the way that getting rid of my own car four years ago has reduced my carbon footprint, comments like Theresa’s are a reminder that for me, too, the primary incentive for going car-free was economic. When my ’96 Saturn bit the dust, I was living only a mile from the nearest MetroLink connecting station, and it simply made good financial sense not to replace the vehicle considering my close proximity and employer-subsidized access to public transportation. The thought of trading the stress of city driving for good exercise helped, too.

For some, such lifestyle shifts result directly from the cultivation of an environmentally mindful conscience. David Ziolkowski, an architectural-lighting designer for HOK in downtown St. Louis, is a good example. He gave up his car about five years ago, a decision that required major changes for him and his family of four.

Back in 2009, as Ziolkowski and his wife were contemplating a move, they set unique transit-oriented criteria for their search, deciding they would only consider homes within a mile of a MetroLink light-rail station and a quarter-mile of a bus stop, so that Ziolkowski could get to the train in a reasonable amount of time by foot, bus or bike. When they found a house that met those specifications in the Richmond Heights area, they purchased it, moved in and sold Ziolkowski’s car on Earth Day in April 2010.

Over an early coffee at Kayak’s at the corner of Skinker Boulevard and Forest Park Parkway, Ziolkowski admits to feeling “a bit odd” for making such a shift. He has friends, he notes, who “don’t give a rat’s ass” about sustainability. But he’s always been motivated by accomplishing things, getting things done, he says, and sustainability issues have long been on his radar at work. HOK was an early adopter of the LEED certification system, and the company is serious about green design and efforts to significantly reduce lighting-related energy use in buildings.

“Being part of the company has just instilled those values in me,” Ziolkowski says. “I think about what the world is going to be like in fifteen, twenty years.” Downsizing to a single car as a family has not been without its challenges, but he has no regrets. 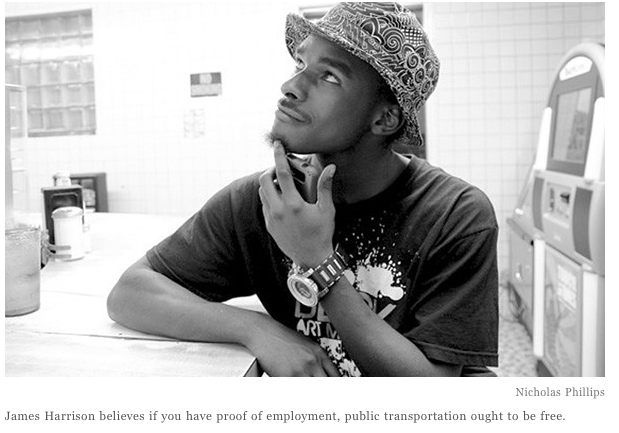 The Cardinals aren’t in town tonight, so James Harrison has the day off — from his line-cook shift at the Angry Beaver near Busch Stadium, that is. The Walnut Park resident and Metro commuter faces another tall order this afternoon: making sure he can afford to travel to and from the job.”If I can’t get bus fare, I can’t make no money,” Harrison explains, blending our phone conversation with Bluetooth-speaker sales pitches to fellow pedestrians. “I’ve been having a rough day so far.” When one passerby turns him down, despite the contrast between the $50 that Harrison says Walgreens charges for the item and his own stated price, Harrison grows frustrated.

“I’m trying to get to work,” he tells the potential buyer. “I need a bus pass, bro.”

Getting around St. Louis without a car has proved far from ideal in Harrison’s experience. During a Redbirds homestand, he typically works ten- to twelve-hour shifts at the downtown sports bar, often wrapping up after midnight. By then MetroLink and MetroBus lines are nearing the end of service for the night, and he’s frequently out of luck for several hours until the next bus shows up between 4 and 5 a.m., long after his two-hour transfer has expired. So he kills the time at the 24-hour Eat-Rite Diner.

The layover itself — along with the company and food — is “cool,” he says. But when it comes to his commute as a whole, he thinks “something needs to be done about Metro.” He has been issued several citations for riding MetroLink without a ticket, and the penalty — as much as $85 a pop and eventually a warrant for arrest if fines go unpaid, according to Harrison — strikes him as overkill.

Before we hang up, Harrison asks where I work — the University of Missouri-St. Louis, I tell him. I don’t mention that one perk is a deeply discounted Metro pass that saves me roughly $60 a month on bus and train fare.

For commuters such as Harrison, a car would certainly mean a lot less hassle and exhaustion. Punch his commute into the default (automobile) tab of Google Maps, and the estimated one-way trip time frame is fifteen minutes flat. The transit options for the same trip range from about 50 minutes to more than an hour — even during the daytime, when buses run regularly.

A car was America’s collective go-to solution earlier this year when the viral story of an older James (Robertson), in another American city, detailed the factory worker’s roundtrip walking commute of 21 miles a day. Donors near and far funneled upward of $350,000 to Robertson — now better known as Detroit’s Walking Man — plus a brand-new Taurus.

The outpouring didn’t address the inadequate bus system that necessitated Robertson’s superhuman work commute in the first place, however. And as Vice News contributor Charlie LeDuff noted in late February, “After that, everybody knew him. And everybody wanted something.” Granted fame and money, Robertson found he had little choice but to move out of his neighborhood.