ST. LOUIS • Xander Wohlstadter’s photographs were waiting for him at his mother’s apartment in St. Louis. 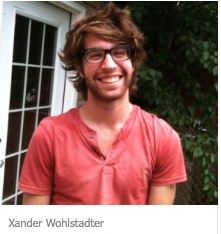 It was New Year’s Eve. Wohlstadter’s mother had texted him earlier to let him know the pictures had come in the mail. The package held dozens of moments he had captured throughout the year: summer scenes in St. Louis, bundled street workers enveloped by sewer steam, candids of his family’s cats.

Wohlstadter, 20, never got to flip through his photographs. He was about a block from his mother’s place on Chouteau Avenue about 9:30 p.m. when an out-of-control driver heading north on Jefferson Avenue broadsided Wohlstadter’s Mitsubishi Lancer at Chouteau, killing Wohlstadter and severely injuring his girlfriend, Emma Casey, 16.

Casey, a student and field hockey player at Webster Groves High School, was still recovering Tuesday from the crash. According to a Caringbridge website established by her family, Casey suffered skull, pelvis and rib fractures but is improving and breathing without a ventilator.

The 26-year-old driver who struck Wohlstadter’s car jumped out of his vehicle and ran from the crash scene but was arrested a short time later in the rear of a building on Chouteau. Police released him the next night because prosecutors are awaiting more evidence as police investigate.

Wohlstadter and Casey worked together at Shaw’s Coffee, a cafe in the city’s Hill neighborhood, and had dated for several months, relatives and friends said. His mother believes the couple were heading to her apartment to pick up the photos, and then planned to go to First Night festivities at Grand Center.

“It was such a gift to have those photos,” his mother, Beth Lewandowski, said Tuesday. “They arrived on the last day of his life, and I loved his work.”

Wohlstadter also worked at Bailey’s Range in downtown St. Louis. His parents said he was a 2012 graduate of Metro high school in St. Louis and was hoping to build on his passion for cooking by applying to St. Louis University to become a dietitian.

His parents said he was creative, a voracious reader and loved learning on his own. They said they didn’t push him to attend college immediately after high school. As a barista at Shaw’s Coffee, they said, he often engaged customers in thought-provoking conversations.

“Xander could connect with you and make you feel better,” said his father, Michael Wohlstadter. “That vitality was just flowing through him.”

Ben Thomas, 21, a childhood friend, said he hopes to read a poem created from Wohlstadter’s “obscure” and “strange” text messages Saturday at a memorial remembrance at the Ethical Society of St. Louis.

“I think he just inspired so many people to be OK with who they are and to embrace their inner weirdness,” Thomas said.

His family asked that anyone wishing to donate in Wohlstadter’s name to send donations to Trailnet, a St. Louis nonprofit group that promotes public transit and biking, one of Wohlstadter’s passions.

Wohlstadter’s parents say they want justice for their son but they aren’t focused on punishment for the man who killed him.

“The only thing I want is for him to come back, and I can’t make that happen,” Lewandowski said. “So my putting bad energy out into the world isn’t going to do anything. That wasn’t my son. I’m just trying to think of what my son would want me to do. I think Xander would want me to go out there and make people smile.”