ST. LOUIS COUNTY, MO (KTVI) – A photograph of a cracked bicycle helmet is making an impression on bicyclists and drivers, alike.

Emergency responders provided FOX 2 with the photographs Sunday.  One shows a car with a shattered windshield, and a bicycle underneath it.  The other photo shows the helmet the bicyclist was wearing.  It’s cracked nearly in two.

The accident happened near Conway and Maryville University Drive.

“Holy smokes,” he said, reacting to the photo.  “I’ve never seen a peer-review journal that says ‘this is how safe you are with or without a helmet,’ but I think it’s common sense that if you’re going to hit the deck you would much rather have polystyrene and protection than your head on pavement or your head hitting a car.”

“A proper-fitting bicycle helmet is very important,” said Bauer.  “And one thing we tell people who want to measure for one is take a string and wrap it around the rider’s head, and measure it with a ruler.  That’s a good way to get a proper-size, fitting helmet.  Another thing is to make sure the foam is pressed up against your head.  And there’s not voids in-between your head and the foam.” 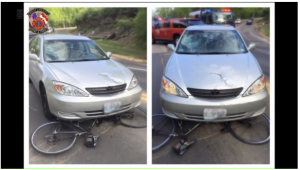 Experts say if you’re going to ride at night, don’t forget the light.  And two are better than one.

“Dawn and dusk, or at night,” said Weiss.  “Riding in the city, those are more for other people to see you.  There’s usually enough ambient light to see where you’re going.  But you should just do whatever you can—put lights on the front, back of your bike and all over your body.  LEDs are extremely bright.  Lights and helmets are not an area to skimp on.”