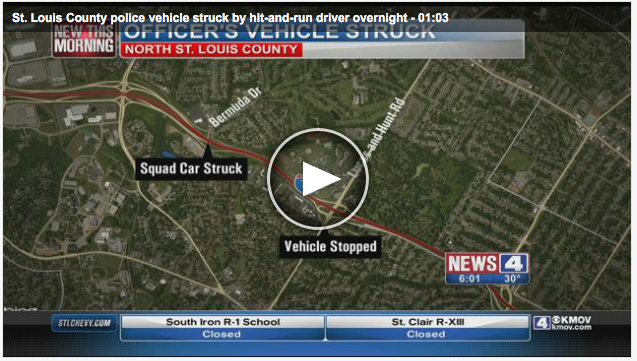 NORMANDY, Mo. (KMOV.com) – A marked St. Louis County Police vehicle was struck by a hit-and-run driver while sitting on the shoulder of the interstate overnight.

Around 12:15 a.m. Monday, the police vehicle was parked on the shoulder of Interstate 70 east at Bermuda when a gray Pontiac Grand Prix struck it.

After striking the police vehicle, the suspect vehicle continued driving along the interstate. It was later stopped by a Northwoods police officer at Lucas and Hunt and San Diego, about a mile away from the crash.

It is unknown if the driver of the vehicle was arrested.

No injuries were reported.