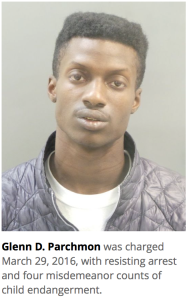 ST. LOUIS • A man police say fled from a traffic stop last week and struck and critically injured a bicyclist has been charged in the incident.

Glenn D. Parchmon, 22, of the 1400 block of Granville Place, was charged March 29 with resisting arrest and four misdemeanor counts of child endangerment because police say four minors were in his vehicle at the time.

Police stopped a 2005 Chevrolet Cobalt driven by Parchmon near Belt and Minerva avenues for unspecified traffic violations about 5:40 p.m. on March 28, police say.

Police say Parchmon fled, ran a stop sign, crashed into a 2000 Oldsmobile and then swerved onto a sidewalk where he hit a 52-year-old man on a bicycle.

Advertisement (1 of 1): 0:15
The bicyclist was critically injured but was considered stable at a hospital. The 71-year-old man driving the Oldsmobile wasn’t hurt.

Police said four children ranging in age from 1 to 4 were in Parchmon’s car at the time. Police have not released the names of the children, the driver who was hit or the bicyclist.

Court records say Parchmon is on probation for 2015 convictions of unlawful use of a weapon and tampering with a motor vehicle.