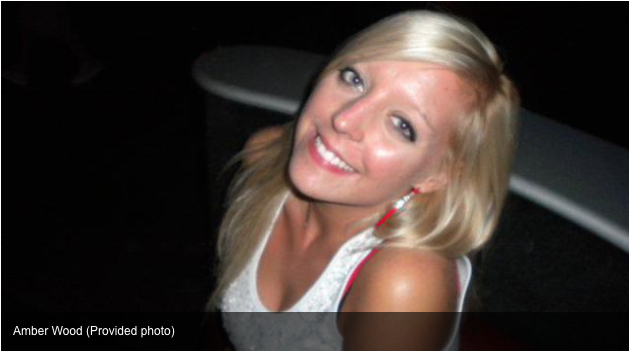 ST. LOUIS (KMOX) – It’s been four years — April 27, 2012 — since 23-year-old Amber Wood was fatally struck by a car as she tried to cross the street near the Broadway Oyster Bar.

“It’s something that I wake up to every morning and go to sleep to every night,” says Wood’s mother, Georgie Busch. “It never goes away. Amber planned on coming home that night, and unfortunately someone else changed that.”

Busch believes she knows who was behind the wheel of the car that struck her daughter, but St. Louis police have not been able to positively link the man — Eric Peterson — to the crime.

Peterson, who was 29 at the time, was arrested the day after the hit-and-run incident after police found the 2002 Pontiac Grand Prix near a scrapyard in Madison, Illinois, and discovered evidence leading them to him.

Peterson, with a long history of criminal convictions for theft, burglary, robbery, assault, driving with drug intoxication and more, was charged in Madison County with obstruction of justice on suspicion of trying to junk the car that struck Wood.

A reward of up to $10,000 remains in place for information that can positively link Peterson to the fatal hit-and-run.

In the meantime, Georgie Busch helped form a group called the Bicycle and Pedestrian Initiative (B.A.P.I., so named in honor of Bapi Gupta, who was also struck and killed by a hit-and-run driver on South Broadway in a separate incident).

The group’s goals include:

1) Implementing substantial pedestrian safety changes to South Broadway. Their motto is “No new victims.” Busch says the city of St. Louis has made changes, like installing flashing light, but she maintains that some of the changes have actually caused a new “false sense of security” for pedestrians and cyclists.

2) Become a leading voice for implementation of pedestrian and bicyclist safety measures such as speed limit enforcement, crosswalks, and speed monitoring signs throughout the entire region.

3) To actively support the internationally recognized concept known as Vision Zero, which submits that traffic deaths and disabling injuries are not only unacceptable, but completely preventable through proper engineering, enforcement and education.
B.A.P.I. has been monitoring crosswalks on South Broadway and near St. Louis City Hall.

Busch still sees a lot of potential for tragic incidents like the one that claimed her daughter’s life.

“You’re almost like playing leapfrog,” she tells KMOX News. “Even though you think you’re safe, people are still trying to make a right or a left while you’re still standing in the middle of the crosswalk.”

A candlelight vigil for Amber Wood is scheduled to be held from 9 to 10:15 p.m. Friday outside the Broadway Oyster Bar.